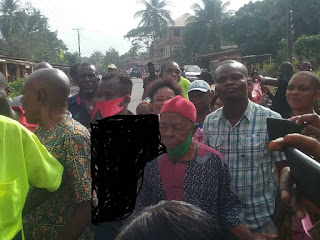 Irked by the illegal activities of land grabbers in Umuoji, Idemili North Local Government Area, Anambra State, thouands Aguma Village , weekend  embarked on protest over the unwholesomev activities  of  the land grabbers in their land at Okofia Umuoji.

The People of Aguma village who lamented that their wives can no longer go to their farm lands nor their youths who want to develope the area as they we're chasing out with guns and other dangerous weopons.

On this back drop ,thounsands of  Aguma people who spoke through their chairman,  Hon. Obinna Okafor, hinted that over 150 plots of land have been grabbed and sold off by the land grabbers.

"They sold about 150 plots of land and are planning to sell more and that is why we embarked on the protest from our Aguma village hall to the PG's house for his immediate action against the land grabbers towards recovering our land".

Also speaking, a community leader, Chief Ifeanyi Efobi, regretted that their land at Okofia would be encroached upon and sold without their consent.

He recalled that when they went to inspect and know the extent of the grabbing they were chased out and gun shot at them which resulted in some of them sustaining various degrees of bullet wound.

In his own contribution, the Chairman of the youth wing, Mr. Chukwuemeka Mekaowulu, said that, "with what the land grabbers are doing we may not have a place to build our houses if they are not

stopped as we don't have land else where"

"The new age want to grab our only land where we farm and we will not allow them. That is why we urge the PG to come to our rescue by chasing away the land grabbers  who drag the image of the community to the mud."

Reacting to the peaceful protest embarked upon by the Aguma village ,the President General, PG, of the community, Chief Silas Onyima, vowed to deal wirh the land grabbers.who were said to have encroached on about 150 plots of land located at Okofia which belong to Aguma people and and allegedly sold them.

The PG assured them that, "not even a plot that belongs to you, Aguma people will be lost to the land grabbers".

"We are in democracy and you have the right to protest against whoever that encroaches on your land so long it is done in accordance with the law".

He told them that, "who ever that sells land at Okofia which does not belong to him is a criminal and I am not in support of that person"

"My work as PG is to protect the entire Umuoji community. My life is at risk because of my efforts to protect our land from external aggression and I assure you that you will get your interest at Okofia"

The PG who hinted further that he does not have a plot at Okofia told them that, "God will not allow your land to be grabbed by those land grabbers  when I am the PG and any of your land grabbed by them I must recover it"

"Nobody will touch your land and anybody I see at Okofia land I will arrest him. The prison is meant for people  like that".

The PG pledged to visit the Okofia land within seven days with the view to seeing the alleged land grabbed as claimed by the Aguma people.

On those protecting the Okofia land Chief Onyima warned tham that, "I told them to protect Umuoji land and if that is not what they are doing I will fight them, I told them not to be involve in land grabbing.