FG records debt service to revenue ratio of 99% in first quarter of 2020. 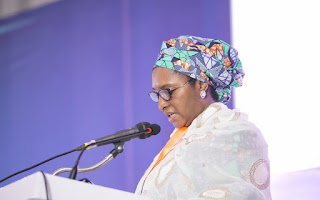 The rising cost of Nigeria’s debt profile breached a new milestone with the country’s debt service as a percentage of revenue rising to 99% in the first quarter of 2020. This is contained  in the Medium-Term Expenditure Framework and Fiscal Strategy (MTEF/FSP) report recently released by the Federal Ministry of Finance, Budget, and National Planning

A cursory review of the data obtained from the MTEF/FSP report shows that in Q1 2020, Nigeria incurred a total sum of N943.12 billion in debt service while the federal government retained revenue was put at N950.56 billion. This implies Nigeria’s debt service to revenue is estimated to be 99% during the period.

This is the highest on record and it suggests almost all the revenue generated from both oil and non-oil sources was used to meet debt service obligations.

Nigeria like the rest of the world has been battling with the COVID-19 pandemic and was expected to suffer a significant revenue shortfall. However, the data suggests the government may have experienced a significant drop in revenues before the lockdown induced economic downturn indicating that things may indeed be worse than projected.

Despite the revenue shortfalls recorded, government recurrent expenditure (debt and non-debt) remained in line with budgetary expectations. According to the data, debt service for the first quarter of the year rose to N943.1 billion divided into domestic debt (N594.23 billion), Foreign Debt (N129.51), and Interest on Ways and Means (219.38 billion) respectively.

The continued depletion in Nigeria’s revenue continues to raise questions around the solvency of the Nigerian economy. Generally, debt sustainability can be explained using either debt to GDP or debt service to revenue ratio.

With Nigeria’s total public debt below 30% of GDP, the country’s debt burden appears to be relatively light compared with many other countries. Meanwhile, debt-to-GDP is not regarded as the best indicator of debt sustainability, especially in a country where tax-to-GDP is low. For Nigeria, a better indicator of debt sustainability is the debt service-to-revenue ratio, which in Nigeria has in recent years risen to worrying levels, and now 99% as at Q1 2020

In 2019, former CBN Governor, Sanusi Lamido, declared that Nigeria is “bankrupt and the country is heading to bankruptcy”. This statement credited to the former Emir of Kano State just after the African Development Bank (AfBD) revealed that Nigeria spends more than 50% of its revenue on debt servicing, and this is worrisome.

With the economy likely on the path to a recession, government revenues particularly non-oil revenues could remain depressed this quarter and the next. This means the government will still need to rely on debt borrowing to fund its operations. Just recently, the national assembly approved another $5.5 billion in debt borrowing for the Federal Government piling more pressure on Nigeria’s debt service to revenue ratio.

Though the latest rise in crude oil prices presents a silver lining, Nigeria still faces a cut in its crude oil output and will earn less oil revenue than was projected. The government has also cut its crude oil benchmark as contained in the MTEF.

“Crude oil production volume has been revised downwards from the 2.18 million barrels per day (mbpd) in the 2020 Budget to 1.9 mbpd (out of which 400kbpd is condensate). This reflects recent oil output cut by the OPEC and its allies to stabilize the world oil market. which put Nigeria’s quota at 1.48mbpd, excluding condensates. Oil production averaged 2.1mbpd in the first two months of the year before the collapse in demand and price as most economies went into lockdown.

Crude oil producers are experiencing great difficulty in selling crude cargoes, resulting in heavy price discounting to attract buyers. Nevertheless, the lower production volume has enabled the NNPC to shut in some very high cost oil wells, and hence lowered the average production cost, from about US$33 to under US$28 per barrel.” MTEF

These challenges also suggest the government may have to rely on funding from the CBN to meet its revenue shortfalls. The government has in the past relied on the CBN Ways and Means to fund recurrent expenditure as it repays with future oil inflows.

According to the Joint World Bank-IMF Debt Sustainability Framework for Low-Income Countries released in 2020, a country’s debt service to revenue threshold should not exceed 23%.

Meanwhile, Nigeria currently stays around 99%. This implies out of every 100 Naira that Nigerian earned in Q1 2020, 99 Naira was spent on servicing debts.

This is an unsustainable model for Nigeria and cannot continue for too long. At some point, the government will have to increase its revenues or face further spending cuts.