I will recover every penny looted from Imo treasury – Uzodinma 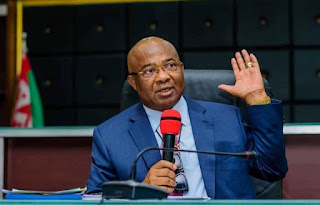 Imo State Governor, Senator Hope Uzodinma, has said that his government will recover to the last penny looted from state treasury by his predecessors.

Governor Uzodinma stated this on Friday in Owerri while addressing stakeholders of the state including his deputy, Professor Placid Njoku.

He said that his government, which is anchored on Reconstruction, Rehabilitation and Recovery, will ensure a sanitized system in the state where Imo taxpayers’ money is not taken by a few greedy individuals to the detriment of the large majority.

“We have sanitized the civil service system and we won’t be having issues of ghost workers or dead people receiving salary and pension.

“Let me sound it as a note of warning, going by the new law on Land Use Charges, all land owners in the state are advised to go for a revalidation of their Certificate of Ownership, otherwise, the government will not hesitate to return their lands to the original owners when the need arises.

“I tell you here and now, any land in the state formerly allocated to individuals or group by past governments, be it hotels or guest houses belonging to the government, shall all be retrieved by the government,” he added.

Meanwhile, he has promised that salaries of workers will be paid without delay as, according to him, the government has made it simple through the new automated system. He therefore wished Ndi Imo a Happy Democracy Day, and promised that better days are ahead.