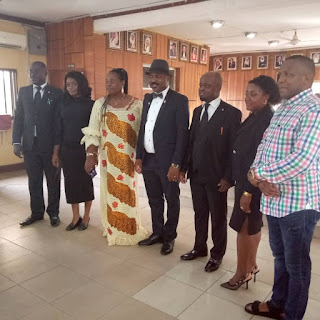 By Karen James.
At the premises of the Onitsha high court, the Nigeria Bar Association Onitsha branch Chapter elected new executives that will pilot the affairs of the association for the next two years according to their constitution.
The election produced Bar.Onyechi Ononye as the new chairman of NBA, Bar. Margret Wilcox as vice chairman, Bar.Frank Ibechukwu as Secretary, Bar.Stella Ikeogu as the Social Secretary and Princess Ajama muoneke as the Treasurer of the Association.
Speaking to news men,the outgoing NBA chairman Bar.Ozoemena Erinne said that the task of moving the association to greater heights remains the top priority of the newly elected executives.
Bar. Erinne listed the renovation of the Bar center to a classic type with building of public toilet for convinence to the general public and members of the bar as well though its not free as it requires payment at the point of entry.
He also advised the incoming chairman and his executives to consolidate on his achievement to record more success in their tenure.
On the other hand, the new elected chairman Bar.Onyechi Ononye  in his acceptance speech thanked all that made his election a reality, he promised to prioritize the affairs of the association over every other thing.
He added that him and his executives will work assiduously to promote the association and the welfare of the members.
Email Post