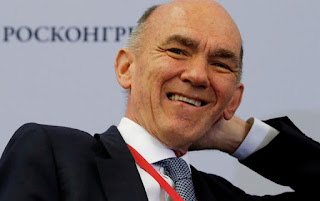 Ian Taylor, the man who transformed Vitol into the world’s biggest oil trader, has died from pneumonia at the age of 64, after beating cancer and stroke just last year. His death was announced by the company on Tuesday.
A risk-taker and revolutionary in the oil industry, Ian Taylor had built Vitol from the ground up into becoming the world’s biggest oil trader. During his active years before stepping down as Vitol CEO in 2018, he had gone from providing billions of dollars to Kazakhstan to flying to Libya during the 2011 uprising against Muammar Gaddafi, and even trading Iranian fuel oil in 2012, despite U.S. sanctions.
He became the CEO of Vitol in 1995 and supplied the opposition in Benghazi with vital fuel in exchange for crude oil cargoes. The Oxford University graduate was also a Conservative party donor who turned down the offer of a knighthood from former British Prime Minister David Cameron. Taylor became one of Britain’s richest businessmen and in 2007 and served as chairman of the Royal Opera House until 2019.
“Ian was a formidable figure in the modern commodities trading industry, and central to the establishment of Vitol as a successful company,” Trafigura CEO, Jeremy Weir, said. The oil veteran who turned the once modest Dutch fuel dealer into a global trading operation had told The Times last year about his bouts with throat cancer in his late fifties, stating his desire to donate funds to develop the proton beam therapy machine that had saved his life.
Vitol and Glencore’s CEO, Ivan Glasenberg, explained that “During Taylor’s time in charge, he was one of the last of the pioneers that helped transform the oil trading industry.” Just last year, the firm had traded around 8 million barrels of oil per day.
In a statement, his successor, Russell Hardy, described him as “exceptional.” He also noted that Taylor combined energy and a determination to succeed with humility, humour, and humanity.”
Email Post