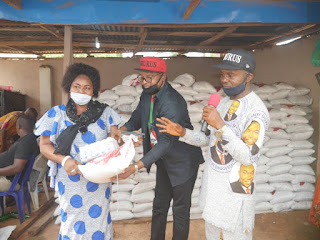 Excitement rented the air when Traders in Nsukka Zone, known as Nsukka Zonal Amalgamated Traders Association* (NZATA) shared palliatives donated by Enugu State Government under the leadership of Rt. Hon. Ifeanyi Ugwuanyi.
The Palliatives which was donated to the traders, and especially the less privileged, was to cushion the effects caused by the covid 19 pandemic.
NZATA is an association of all Traders in the 38 Markets in Nsukka Senatorial Zone, which comprise of, Udenu LGA, Nsukka LGA, Igboetiti LGA, Igboeze South LGA, Igboeze North LGA and Uzouwani LGA.
Hon. Dominic Ezema (Decency) the President of NZATA, after sharing the palliatives, expressed the joy of traders while commending Governor Ifeanyi Ugwuanyi’s benevolence on the wellbeing of the people of Enugu State.
Hon. Ezema thanked His Excellency, Governor Ifeanyi Ugwuanyi for his humane disposition and feelings for remembering them in this challenging period.
He also thanked the Governor for ensuring, that the markets in the state are opened for business, while observing the covid19 safety measures. He promised that the traders would always obey the restriction order according to the NCDC and the State government.
The SA, Special Duties to the Governor, Prince Emma Efoke, who represented the governor was present to ensure that the distribution of the palliatives went on without any hitch. Hon. Efoke told the Traders that this gesture was an enhancement of “His Excellency's commitment to the wellbeing and happiness of Ndi Enugu, most especially, the less privileged, which is to help contain and cushion the effect of the covid 19 pandemic in the state.
He further encouraged the Traders to always support His Excellency and his government and also pray for his success, to ensure the provision of the dividends of democracy to the people of the state. He further tasked the association to ensure they are of good conduct in their various markets.
Prince Emma Efoke also commended NZATA under the leadership of Hon. Dominic Ezema for their peaceful conduct, during the distribution of the palliatives and their obedience to  government’s restriction orders as well as the regulations and protocol's for the containment of the spread of the disease as advised by the Nigeria Centre for Disease Control (NCDC).
Also present at the palliatives sharing ceremony were the Chairmen and executives of the 38 markets in the Zone, and  the State Exco  of Traders in the state.
Email Post