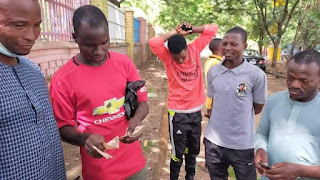 The Honorable Minister Of State For Education, Hon. Chukwuemeka Nwajiuba-(HCN) has   empowered  Queen Amina Support Initiative (QASI) for Talakawas /Almajiri with a seed fund of five million naira (N5,000,000.00), to set up a cooperative, for small business, pending when the  (Out -Of-School Children Program) will commence.

This support is very timely as most Talakawas are idle, and roaming the streets, as their means of survival is  by begging for arms. This, was what spurred the minister in making sure that these children are given a source of income through petty busy to sustain themselves.

The increased presence of beggars, children, youths and adults at almost every public place, like worships centers, filling stations, restaurants, super markets, in most northern states in Nigeria is becoming a matter of concern to every serious minded Nigerian.

The issue of Almajiri, a Hausa word meaning immigrant child in search of Qu’ranic education, has become worsened by the economic crisis.

The children are sent out early in life to seek Islamic knowledge outside their environment. They are placed under Islamic teachers known simply as Mallams, under whom they are supposed to learn the rudiments of the religion.

In most cases, and due to the high level of poverty and the large number of children, the Mallams have to cater for, they are often not able to take adequate care of the children; thus, they are sent out to search for their livelihood.

The ‘Almajiris’ are referred to as ‘street children’ due to the way they wander along the streets begging for food, clothes and other necessities.

They are very vulnerable, because of the lack of care and weak foundation been given to them. Whenever they go out to beg for food, every Moslem is under obligation to give them whatever food that they can afford, and this is decreasing due the current economic crisis.

The Almajiri are innocent children who have become unfortunate victims of societal neglect, let loose to drip and get drowned in the unfathomable sea of corruption, ignorance and poverty; and thus often hypnotized, hoodwinked, coerced or simply hijacked to play active roles in many of the northern conflicts.

The parent of the Almajiri is supposed to cater for their basic needs, but this is not the case in Nigeria presently, as most of these parents are illiterate and poor. The only responsibility the parents owe these hapless children is to bring them to the Quaranic School and they are then left to their fate. Some of them are forced into the act of begging and doing menial jobs.

They have large population that runs to several thousands and are prevalent in almost all the villages and cities in the North. Only male children are involved because the females are assets to their parents.

Any female child born by a household in Northern Nigeria is a ticket for wealth making because of the ‘bride price’ that must be paid on them by intending husband.

It is believed that with this grant to Queen Amina Support Initiative (QASI) for Talakawas /Almajiri, the Almajiris who will benefit from the scheme will use it to better there lives, and stay off the streets, to the glory of God and humanity.