VALENTINE OZIGBO MEETS WITH NDI ANAMBRA IN LAGOS, UNVEILS HIS VISION FOR A NEW ANAMBRA STATE 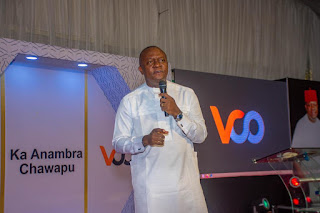 The well-attended town hall meeting was the first of its kind by an Anambra gubernatorial aspirant. It witnessed lively conversations on the topical issues affecting the people of the south-eastern state.

Ozigbo opened his remarks by thanking the audience, which had his beautiful wife, Mrs. Ojiugo Ozigbo and the crème-de-la-crème of the Anambra Lagos community like billionaire business mogul Chief Chidi Anyaegbu, the chairman and founder of transportation and hospitality behemoth, the Chisco Group of Companies, in attendance. 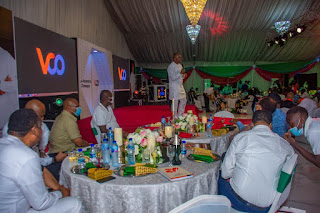 "I decided to run for governor of my beloved home state because I am uncomfortable with the status quo," Ozigbo, a respected business leader, told the audience.

"It is unfortunate that given the abundance of human capital, talent, and resources that Anambra has, we are still talking about providing basic infrastructure and social services for our people. These should have been forgotten problems by now.

"We are supposed to be an exemplary state in terms of good governance and leadership. I am in the race for governorship to change the story of Anambra for good," he declared.

"This is just another step in the journey of engaging the people to make sure that the issues that matter to Ndi Anambra are the front-burner issues for my administration," he said.

According to Mr Ozigbo, he decided to host the town hall events across the country to deliberately widen the scope of his consultations and carry along all Ndi Anambra, irrespective of state or city of residence, in his quest to govern. The 2nd leg of the Lagos event holds at Amuwo-Odofin in Lagos on Sunday March 21, 2021. Similar town hall meetings have been slated for Monday and Wednesday in Abuja on March 22 and in Enugu on March 24, respectively.

The event's highlight was Ozigbo's campaign manifesto's unveiling, which he titled the "Ka Anambra Chawapu Manifesto". Ka Anambra Chawapu is the business mogul's campaign slogan, and it means "A Brighter and Better Anambra". The glossy 36-page document was distributed to the audience along with other branded souvenirs.

"We are not here to lament over the past; we are here to actualise the bright future of our dreams," Ozigbo said as he unveiled his manifesto.

"Anambra can be a paradise if we have the right people leading our state. We have compressed my Ka Anambra Chawapu agenda into this comprehensive document.

"We have put together an ambitious plan, and we called it Project Chawapu. It covers every aspect of governance, and if given a chance, we will surpass our promises to Ndi Anambra," Ozigbo declared.

Speaking on his qualifications for governor, Ozigbo said, "We have to insist on character, competence, and compassion in choosing our governor. I represent the right combination of these qualities."

Some of the dignitaries in attendance spoke highly of Ozigbo. They expressed confidence that if he won the upcoming election, he would run the best government in the history of Anambra.

"I am a businessman, and my focus is on your plans for the economy and creating an enabling environment for business," Mr Tobe Okigbo said. "Anambra simply needs a CEO, and Val is a CEO; he is who we need."

Tony Iju, a titled chief and businessman, who spoke, also expressed confidence in the Project Chawapu agenda and said, "Anambra elections is the toughest in the country. Let me announce to you all here that there is no part of Anambra you go today, no ward out of our 326 wards, that they don't know Val. He has done very well to achieve this level of popularity and acceptability in a little more than a year."

Continuing, Iju declared, "You have already won. From what I have seen on Page 17 of this manifesto, if you can stick to this plan, Anambra will be the best state in Nigeria."

Chief Chike Chikeluba (Onwa Awka Etiti) also expressed gladness with the quality of Val's candidacy and urged everyone to rally around him for support.

"This event signified a remarkable shift in strategy," Director of Contact and Mobilization for the Valentine Ozigbo Campaign Organisation, Hon Tim Egboka told the press. "It is an ascension to the next level in his consultation and interaction with Anambra people from all walks of life."

"Recall that Mr Ozigbo, who had practically relocated to Anambra in the last one year, had consulted and interacted with different segments of Ndi Anambra within the state all that while.

"He had particularly, in preparation for his party's primary, toured the 21 political local government councils of the state about five times," Hon. Egboka, a former Anambra State lawmaker said.