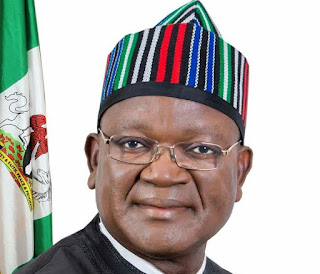 Governor Samuel Ortom of Benue State on Monday, cautioned against anyone politicizing last Saturday’s attempt on his life by suspected armed herdsmen at Tyo-Mu community in the outskirts of Makurdi town along Makurdi-Gboko road.

He lamented that the level of insecurity in the country was a clear indication that Nigeria was sitting on a gun powder and everyone must be conscious to avert an implosion.

The Governor who spoke at the end of an emergency State Security Council meeting held in Makurdi on Monday, March 22, 2021, appealed to Benue people to be calm and await the outcome of the investigation being carried out by the Police as directed by the Inspector General of Police, IGP.

Mr. Ortom, however said that he was still in shock, and lauded the Presidency, the Inspector General of Police, IGP, as well as the array of groups including Nigeria Governors’ Forum, Peoples’ Demicratic Party (PDP) Governors’ Forum, All Progresdives Congress (APC) Governors’ Forum, National leadership of PDP and APC, the media, the traditional institution, Christians, as well as all Nigerians and people of goodwill for their show of concern and solidarity since the incident befell him.

He expressed optimism in the ability of the IGP's team to do their job and fish put the perpetrators, adding that the State Security Council has also set up a panel to assist the State Commissioner of Police to investigate the incident.

In his words, he said “I urge Benue people to be calm because the matter is being investigated and we hope that those behind the attack would be apprehended and prosecuted."