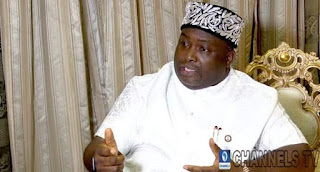 ~ Expresses Worry Over Alarming Rate Of Insecurity  In Anambra.

~ Calls On Government To Harmonize Security Systems To Curb The Menace.

In a press statement, made available to Nigerian Notch, through his spokesperson, Hon. Chuks Kamen, Senator Ubah said, that he received the news of his unfortunate demise with shock, and expressed his heartfelt condolences and regrets, that these unfortunate security breaches that cut short the lives of our enterprising youths are avoidable occurrences, that require a deliberate system overhaul and renewed dedication to duty especially by public office holders.

The Distinguished Senator, who recalled several other similar regrettable security breaches in the state in recent past, called on the state Governor to rise up to the occasion and provide leadership, as the state face renewed security challenges.

One may recall that on  Friday 19th March,2021, two prison officers were killed at Ekwulobia in Aguata Local Government Area and this came barely 24 hours after some naval officers and policemen were also killed at Awkuzu and Neni respectively. While the report that a naval outpost close to Onitsha Bridgehead was attacked in the past week and consequently, some naval officers killed and their arms carted away is worrisome.

"While I condole with the families of those killed and pray that God grant them the fortitude to bear the heavy loss. It is also my firm belief that the state government can do better in tackling these challenges especially by empowering and building a sustainable synergy between the vigilante system in the Local Government Areas and towns with the various security agencies in the state". The Senator said.

According to Senator Ubah, Anambra is the commercial nerve centre of not just the  southeast,  but with the potential of being same in the entire Nation. The State Government should, as a matter of urgency, put in place measures that will secure the residents and safeguard lives and properties. The time to end these killings and secure our dear state is now. All hands must get on deck to proffer solutions to these rising incidents of insecurity, now prevalent in the state. He concluded.