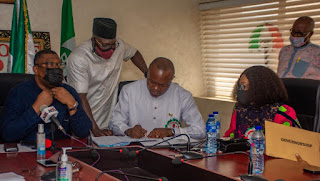 Valentine Ozigbo, Former President & Chief Executive Officer of Transnational Corporation of Nigeria Plc,(Transcorp) a Frontline aspirant of the PDP in 2021 Anambra governorship election, has purchased the Peoples Democratic Party (PDP) expression and nomination of interest form at the Wadata Plaza,Wuse Zone 5 Abuja on Monday, March 22,  2021 for the party’s primaries.

In his remarks, the respected business mogul expressed his commitment in the pursuit of excellence in all his endeavours, a stance he is bringing to play in the 2021 gubernatorial race in Anambra.

In his words “I feel like the election is already here. Looking at the people here with me today and the support they have shown, since I expressed interest to join this race, I am confident that we are on the right path,” Ozigbo opined

He said he is grateful to God for keeping everyone alive to see this remarkable day and  expressed his gratitude to his fellow party members, his ever hardworking team members, and most especially, Ndi Anambra for standing by him from the very beginning. 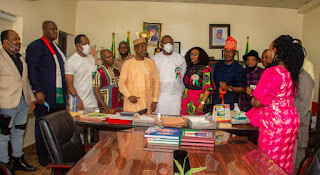 Continuing, he said "Picking the form is one of the steps in our pursuit of excellence, the biggest is still ahead and for that, I will continue to solicit for your support and prayers," Ozigbo declared.

Ozigbo, while speaking to  newsmen after picking his forms, assured that he would run a government wholly committed to delivering excellent governance to the people of Anambra if given the chance by the PDP to emerge as it's candidate, knowing that Anambra is in dire need of a personality like him to bring back the fortunes of Anambra, to re establish it's place, as  light of the nation. 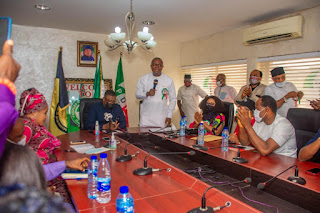 “I’m looking forward to the challenge ahead. It’s a new dawn for Anambra State. I’m filled with a renewed hope and excitement," Ozigbo told members of the PDP press corp.

“We are bringing fresh ideas that put the core needs of the people on the front burner while creating policies that will benefit generations to come.

"It is time we stop playing small by talking about good governance, I am in this race to provide excellence in governance  to my people," he declared.

Valentine Ozigbo is the immediate past President and Group CEO of Transcorp Plc, a diversified conglomerate with interests in hospitality, power, oil and gas, and agribusiness.

One of a few global kaizen champions, he is the founder of the Valentine Chineto Ozigbo (VCO) Foundation, one of Nigeria’s leading charity organizations, focusing on youth, women empowerment, business and leadership mentoring, and talent development.