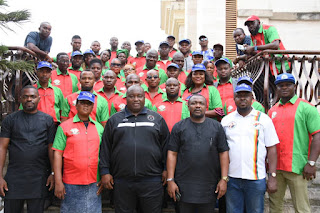 The Senator representing Anambra South and National Leader of the Young Progressives Party (YPP), Dr. Patrick Ifeanyi Ubah on Saturday charged Anambra people, and Nigerians at large, on the need to shun political apathy and ensure greater participation in electoral process at the various levels of governance.

The Senator made this call while addressing the leaders of Ifeanyi Ubah Solidarity Movement (IUSM) across the 21 Local Government Areas of Anambra State, comprising of Coordinators, secretaries, women leaders, youth leaders, media officers, who paid him a courtesy visit at his residence in Umuanuka, Otolo, Nnewi. 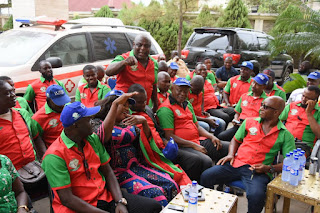 According to Senator Ubah, achieving good governance will be easier if citizens fight against electoral apathy by fully participating in the electoral process which involves voter education, voter registration, voting during elections as well as aspiring for political offices. He also urged citizens to always hold government at all levels responsible and make them accountable by demanding regular publication of their official activities, asking relevant questions and passing Vote Of No Confidence, when necessary.

The YPP National leader while addressing the IUSM Cordinators   further reassured his constituents, Ndị Anambra and Nigerians at large that he would always use instruments of his office to encourage greater citizen participation in politics and governance. He also reiterated his commitment towards human capital development and using his office to attract quality projects to his constituency. He urged the people, particularly the youths, to remain patriotic and law abiding but never to compromise on holding elected public officers to account

Responding on behalf of the delegation, the IUSM National Leader, Chief Michael Nweke Okechukwu, thanked Senator Ubah for his efforts and giant strides towards promoting the wellbeing of the people. He said that his team was there to appreciate him on his good works and urged him to keep doing good for the citizens as God is the only One that can reward him. Chief Okechukwu  also thanked the Senator for the quality Motions and Bills he has sponsored so far and maintained that those Motions and Bills would go a long way in not only promoting the wellbeing of his constituents but also play vital roles in promoting various sectors of the Nigerian economy.He concluded by expressing his gratitude to the Senator for his sterling performance so far at the Red chambers which has made their current efforts at mobilising our people very easy and smooth.

Also present at the meeting to express their solidarity with IUSM for synergetic consolidation of Senator Ubah's efforts in ensuring good governance, were the General Coordinators of Active Voters Solidarity Movement and Afaigboefuna Movement, Hon. Mrs. Ngozi Ubah and Hon. Mbazulike Iloka, respectively. These groups, who are also championing greater citizen participation in the electoral process and promotion of Igbo norms and culture, are among the various structures of the Ifeanyi Ubah political family.

The meeting came to an end after a 4-hour deliberation with the determination by the Mike Okechukwu led IUSM to go back to their various grassroot levels and continue their efforts at  enlarging  their coast, since politics is a game of numbers.

The Movement is made up of individuals who believe in Ubah's  Ideology and voluntarily offered to promote the Ifeanyi Ubah brand.